Judy Darcy was elected as MLA for New Westminster in 2013 and re-elected in 2017. On July 18, 2017 she was appointed by Premier Horgan to serve as BC’s first Minister for Mental Health and Addictions. Her mandate letter is available here.  From 2013-2017, Judy served as the Shadow Cabinet Spokesperson for Health. She is a passionate advocate for issues facing her constituents – including funding for public education and public transit, overcrowding and wait lists at Royal Columbian Hospital and support for local businesses and local artists. 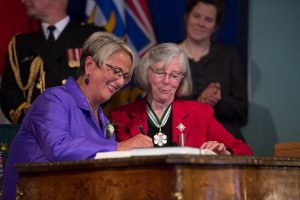 At the BC Legislature, Judy has championed causes such as supporting our local food economy, preventing tobacco companies from targeting youth, and creating a specialized health clinic for survivors of childhood cancer.

Judy is an experienced and powerful voice for working families. Passionate about community, she has led successful campaigns for public health, child care, education, seniors care, and clean water.

In the 90s, Judy served as National President of the Canadian Union of Public Employees (CUPE). For many years she was the only woman to lead a national union in Canada. In 1997, Judy co-founded Water Watch, a ground-breaking national and local alliance of environmentalists, citizens groups and blue-collar workers who work to protect Canada’s water and keep it in public hands.

Judy went on to lead the Hospital Employees Union and reached a historic settlement for healthcare workers after the Supreme Court found that Bill 29 violated Charter-protected rights to collective bargaining.

Born in Denmark, Judy’s family immigrated to Canada and shared many of the challenges that new Canadians face. She is married to human rights and labour lawyer Gary Caroline and has an adult son. She enjoys long walks, the Royal City Farmers’ Market, devouring good novels, hiking, kayaking, and watching the ever-changing activity and light on the Fraser River from her windows.